What is carpal tunnel syndrome?
It is a common condition in which there is increased pressure on the median nerve as it passes through a space in the wrist called the Carpal Tunnel.

What is the cause?

In the majority of cases there is no known cause. There are several conditions which may contribute to or be associated with its onset such as Diabetes, pregnancy, thyroid disorders, rheumatoid disorders and wrist trauma.

History
Compression of the nerve can cause symptoms in the radial side of the hand such as uncomfortable ‘pins & needles’, burning sensations, or numbness and weakness in more severe cases. Occasionally the discomfort may extend from the hand into the forearm, and worsen with some manual activities such as driving or typing. Symptoms classically wake patients from sleep at night.

The hand is examined for altered sensation affecting the thumb, index middle and radial half of ring finger. Wasting of the thenar musculature and weakness of thumb abduction are late signs indicating more severe compression. 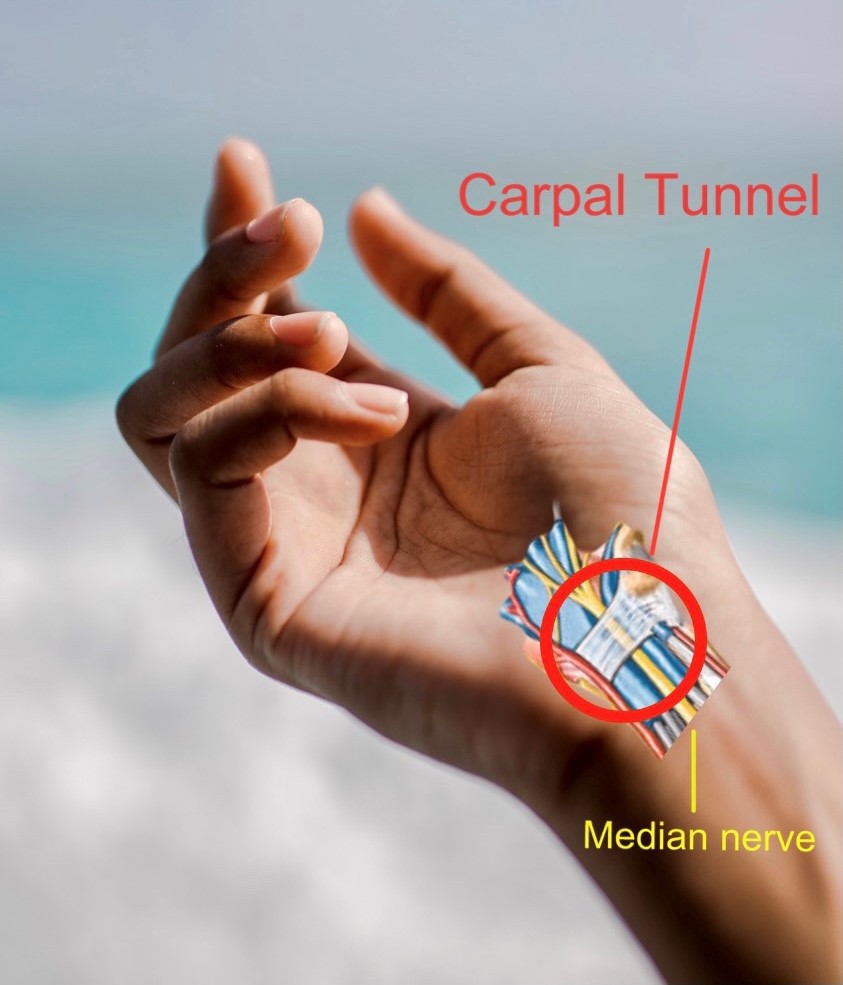 Where the diagnosis is not clear, nerve conduction studies are useful. They provide information regarding the severity of compression. This provides a guide to treatment but also can provide some information regarding prognosis following treatment. Please be aware that a small percentage of patients may still have carpal tunnel syndrome in the presence of normal nerve conduction studies, i.e. false-negative test results.

For less severe symptoms, the following options may be used:

Wrist splints: A wrist splint worn at night can give some relief of mild night-time symptoms by preventing the hand and wrist from adopting positions that put pressure on the nerve.

Cortisone injection: This is a steroid injected into the carpal tunnel used to confirm the diagnosis and to reduce inflammation. It improves symptoms initially in over 60% of patients which may be sufficient to allow the compression to resolve where there is an identifiable cause (e.g. pregnancy or mild trauma). However, only around a third of patients have long-term improvement. The effect of the injection tends to be better in younger patients.

For more severe cases, a Carpal Tunnel Decompression may be recommended. For the majority of patients, most symptoms are reversible. However, if there has been long-standing or severe compression to the nerve, symptoms of numbness and weakness may take longer to resolve, and may not resolve fully.

This can be performed as either an open procedure or an endoscopic (keyhole) technique. In most circumstances an open technique is preferable. This is performed under Local Anaesthetic as a Day Case procedure. Surgery aims to relieve pressure on the Median Nerve by dividing the roof of the carpal tunnel (transverse carpal ligament).

We’re ready to give expert advice on Carpal Tunnel Syndrome