What is it?
The scaphoid bone is one of the eight small bones of the wrist. It is the most commonly fractured wrist bone, classically occurring after falls onto an outstretched hand. The scaphoid bone has a very limited blood supply, especially the part of the scaphoid that is closest to the wrist joint itself (“the proximal pole”). Most fractures of the scaphoid will heal (unite) without problem following a period of immobilisation (6-12 weeks) in a splint or Plaster of Paris. Fractures that are displaced or are in the area of the proximal pole, have a higher chance of not healing, which is called a non-union. Smoking also significantly increases the chance of a scaphoid non-union occurring. 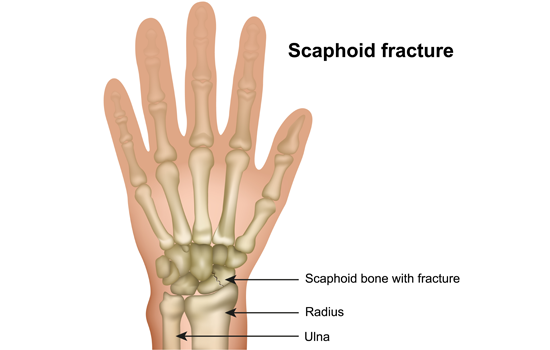 What problems will a scaphoid non-union cause?
Patients will often complain of pain, particularly on gripping objects firmly, on the thumb side of the wrist. Loss of wrist movement and pain on activities such as push-ups are common. Some patients with a scaphoid non-union will have surprisingly few symptoms initially. The non-union does however change the complex biomechanics of normal wrist movement. This will almost inevitably lead to a particular pattern of arthritis developing in the wrist, which is called a SNAC wrist (scaphoid non-union advanced collapse). This causes increasing pain and stiffness.

An X-ray will often demonstrate the non-union. Your surgeon will sometimes request a CT or MRI scan in order to obtain further information about the shape and/or blood supply to the scaphoid non-union.

The treatment that is applicable to you will depend on whether there is arthritis present in the wrist as a result of the non-union. Your surgeon will assess this.

In cases where there is no arthritis, the following treatments may be discussed. We would advise surgical intervention in such cases, in order to reduce the chances of developing arthritis in the future.
The aim of surgery is to realign the scaphoid, where necessary, and freshen up the bone ends to allow union to occur. A screw is placed down the middle of the scaphoid to hold the two bone fragments rigidly whilst healing occurs. A gap is often present between the bone ends, which is filled with bone graft. This bone graft can be either taken from the wrist or hip area in most cases. In cases where the blood supply to the scaphoid is felt to be very poor, a special type of bone graft which is still attached to a blood vessel can be harvested from the wrist. This is called a vascularised bone graft. This may give a slightly higher chance of the non-union healing, although the evidence for this is still debated.

The operation is performed under Regional and/or General Anaesthetic. You will be admitted overnight following your surgery. A bulky dressing, which includes a Plaster of Paris, is applied to the hand and wrist. The arm should be kept elevated as much as possible to reduce swelling. Movement of all the joints that are not immobilised is essential to prevent stiffness. If a bone graft has been taken from the pelvis, this can be quite uncomfortable for the first few days.

You will be seen in the outpatient department approximately two weeks following your operation. The wound will be checked and your dressing changed. Another splint or Plaster of Paris will be applied. The wrist will need to be protected until the scaphoid has healed.
At six weeks, an X-ray will be taken to see whether the bones have joined. A removable splint may be applied at this stage. Rehabilitation of the wrist will be guided by our Hand Therapy team. Solid union may not occur for three months following your surgery. In a very small percentage of patients the scaphoid bone may still not heal, requiring possible further surgery. 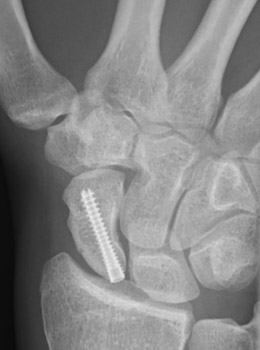 If there is arthritis present in your wrist, your surgeon will assess the severity of this. You will be guided as to which treatment options are available depending on the extent of the changes seen.

Simple interventions such as regular analgesia, activity modification, splints and steroid injections should be tried before surgical intervention is considered. There are a number of surgical options for painful wrist arthritis

Wrist denervation
This operation involves removing the small nerves that supply sensation to the wrist joint. This will have no detrimental effect to the sensation to the hand/fingers. This procedure can provide benefit, relieving pain, in patients for several years.

Proximal Row Carpectomy
This operation involves removing the nearside row of the wrist bones. This is again only appropriate for some patients in which the other articular surfaces are healthy. Again this procedure will maintain some wrist movement.

Wrist Fusion
Wrist fusion (or arthrodesis) is an operation in which the moving surfaces of the wrist are removed in order to fuse those joints together. This will be helped by packing bone graft around the joints. A specially designed plate and screws (or occasionally a metal pin) will be used to stabilise the bones while they heal. The bone graft is taken from either the wrist area or the pelvis/hip bone. Wrist fusion may be considered as a revision type procedure should a wrist replacement fail or loosen.

We’re ready to give expert advice on Scaphoid Non-union