What is it?
Wrist replacement (arthroplasty) is an operation in which the worn out parts of the wrist are substituted for an artificial joint. Modern wrist replacements consist of two main components with a metal-on-plastic bearing.

When is it required

Wrist replacement surgery is usually performed for arthritis of the wrist which is associated with pain. It is most commonly performed for patients with an Inflammatory-type arthritis. Arthritis leads to the destruction of the normally slippery articular cartilage found at the ends of bones. This articular cartilage allows smooth movements of joints without pain or friction. Once this articular surface is lost, as occurs in arthritis, the ends of the bones are exposed. Now, rather than smooth movements, the surfaces are rough. Pain and loss of movement can occur as a result. 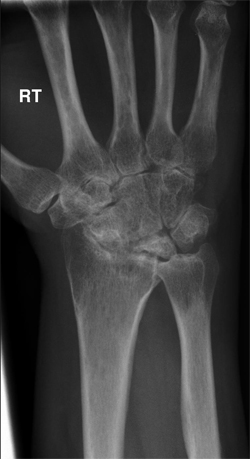 The operation is performed under Regional and/or General Anaesthetic. You will be admitted overnight following your surgery. A bulky dressing, which includes a Plaster of Paris, is applied to the hand and wrist. The arm should be kept elevated as much as possible to reduce swelling. Movement of all the joints that are not immobilised is essential to prevent stiffness.
You will be seen in the outpatient department approximately two weeks following your operation. The wound will be checked and your dressing changed. Our Hand Therapy team will review you at this stage to commence rehabilitation. You will be fitted with a removable splint to wear for several weeks.
At six weeks, you should be able to undertake light activities with the wrist. Wrist replacement surgery can improve motion to approximately 50% of normal.

The use of the arm for physical tasks should be restricted following wrist replacement surgery. It is recommended that you avoid lifting more than 4.5Kg (or 10lbs) of weight with the affected arm.

It is expected that a wrist replacement will last between 10-15 years with careful use. You will be reviewed on a regular basis to identify any developing conditions or problems.

Are there any alternatives?

Simple interventions such as regular analgesia, activity modification, splints and steroid injections should be tried before surgical intervention is considered. There are a number of surgical options for painful wrist arthritis. Your surgeon will assess the severity of your symptoms and arthritis and discuss with you which treatment is most appropriate.

Are there any other surgical options?

Wrist denervation:
This operation involves removing the small nerves that supply sensation to the wrist joint. This will have no detrimental effect to the sensation to the hand/fingers. This procedure can provide benefit, relieving pain, in patients for several years.

Proximal Row Carpectomy:
This operation involves removing the nearside row of the wrist bones. This is again only appropriate for some patients in which the other articular surfaces are healthy. Again this procedure will maintain some wrist movement.

Wrist Fusion:
Wrist fusion (or arthrodesis) is an operation in which the moving surfaces of the wrist are removed in order to fuse those joints together. This will be helped by packing bone graft around the joints. A specially designed plate and screws (or occasionally a metal pin) will be used to stabilise the bones while they heal. The bone graft is taken from either the wrist area or the pelvis/hip bone. Wrist fusion may be considered as a revision type procedure should a wrist replacement fail or loosen.

We’re ready to give expert advice on Wrist replacement